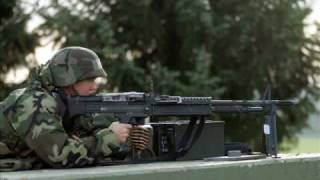 Lock n' Load with R. Lee Ermey is a television program on History that discussed the development of military weaponry throughout the centuries. It was hosted by R. Lee Ermey. In a typical episode, Ermey focused on one specific type of weapon or weapon system, presenting key advancements in its technology and demonstrating their use with the help of experts. In a holdover from his duties hosting Mail Call on the History Channel, he frequently added humor in the form of light-hearted drill instructor haranguing aimed at the viewer. He also displayed an eagerness to try out the episode's relevant weapons against a wide range of targets, particularly watermelons ("they taste better after being shot with a machine gun"), as well as glass bottles. resumen corto: