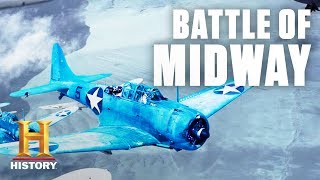 The Battle of Midway resumen corto:

National Geographic: Generals At War: The Battle of Midway. In 1942, The US Navy has been devastated at Pearl Harbour. To wipe out these carriers, Nagumo lays a trap for US Admiral Fletcher. Considered the most important battle in the pacific during WW2, an examination of the battle tactics of Japanese Adm. resumen corto: